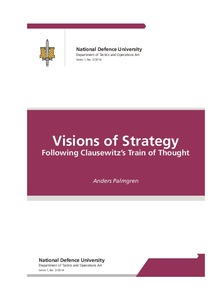 This dissertation analyses Clausewitz’s train of thought on strategy, which includes visualizing and explaining how Vom Kriege was written. The work revisits German primary sources and utilizes context to interpret Clausewitz’s intellectual development. Theoretically, the work draws upon Gadamer’s Philosophical Hermeneutics and theory of Wikungsgeschichte, Kosselck’s theory of Begriffsgeschichte and Skinner’s theory of using context to interpret political thought. Present research and different understandings of Clausewitz and strategy are conceptualized from this theoretical point of view.

It is argued that current way‐pointing interpretations, suggesting a great gulf in Clausewitz’s ideas due to his observation of politics in 1827, fails to understand his train of thought and way of theorizing strategy. On the contrary, the well‐known coining of war as a continuation of Politik in 1827 was only analytical fine‐tuning, an adjustment, to save his initial constructions and achieve theoretical coherence. The present work suggest that the merit of Clausewitz’s work is foremost theoretical, clarifying the problem how to think strategy properly, and by implication revealing the limits of military knowledge.

The present work explains Clausewitz’s work in the delicate nexus of moral‐politicalmilitary thought. His train of thought is instructive to the broader problem of bridging visions and realities in this nexus. Note that Clausewitz refuted war as a solid military thing for strategic thought in the end of his analysis. His way of theorising strategy is imaginative, with a firm practical scope. Read in this way, Clausewitz is a frank vehicle for professional reflection, which also derives a clear theoretical result, possible to contest.