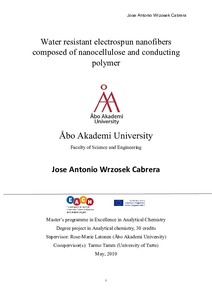 Nanofibers of novel polymer compositions containing cellulose nanofibrils and the conducting polymer poly(3,4-ethylenedioxythiophene) doped with polystyrene sulfonate (PEDOT:PSS) were prepared via electrospinning and characterized regarding their morphology, water resistivity and electrical activity. Poly(ethylene oxide) (PEO) was used to support the electrospinning process and poly(ethylene glycol) diglycidyl ether as a cross-linking agent to induce water resistivity to the nanofibers.

The influence of different dispersion compositions, pumping rates and applied potentials on the electrospinning process were studied, and the best parameters were chosen based on the morphology and electroactivity of the nanofibers.

Scanning electron microscopy (SEM) was used to study the morphology of the electrospun nanofibers and Energy Dispersive X-ray Analysis (EDXA) to determine the C/S ratio of the nanofibers made with different dispersion compositions.

The nanofibers with the most uniform morphologies were studied with cyclic voltammetry in order to find out their electrical activity. All nanofibers tested exhibited a capacitor-like behavior.

The stability of the nanofibers in water was also studied by measuring the long-term electrical activity with cyclic voltammetry. The best compositions were stable for up to two months with little to no lessening of their charging capacity. Infrared spectroscopy was used to study the changes in the molecular structure of the nanofibers before and after contact with water. It was observed that PEO dissolved in water but the PEDOT:PSS/CNF structure remained. Nanofiber diameter appeared to increase from approximately 200 nm to 350 nm as shown by SEM.