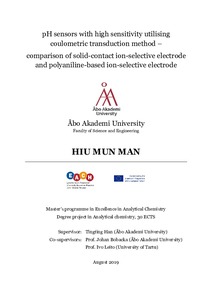 This thesis compares the analytical performance of solid-contact ion-selective electrodes (SCISEs) and polyaniline-based ion-selective electrodes for the determination of pH using a newly developed coulometric signal transduction readout method. For the SC-ISEs, the conducting polymer poly(styrene-sulfonate)-doped poly(3,4-ethylenedioxythiophene) (PEDOT(PSS)) served as an ion-to-electron transducer. The coulometric transduction readout method was able to amplify the analytical signal by increasing the thickness of the solid-contact layer. It also was shown that the thinner the ion-selective membrane, the shorter the response time, which could be associated with a more rapid ion transport between the ion-selective membrane and the solid-contact layer.
For the polyaniline-based ISEs, the coulometric response was found to be not entirely proportional to pH. This could be explained by the cyclic voltammogram of polyaniline which contains several peaks, meaning that the redox capacitance of polyaniline depends on the potential, as does the coulometric response. Since the conducting polymer worked both as an ion-to-electron transducer and as a sensing membrane, the chronoamperometric response of the polyaniline-based pH sensor was directly affected by interfering ions. By integrating the resulting current against time, the coulometric signal readout has shown to be useful in reducing the noise level. Under optimised conditions, a 10 mC PEDOT(PSS) solid-contact pH sensor covered with a drop-casted ion-selective membrane was able to detect 0.18 % change in concentration; a 50-cycle polyaniline-based pH sensor could detect a 0.36% change in concentration using the novel coulometric transduction method.