Nanoparticles as Targeting System for Cancer Treatment : From idea towards reality 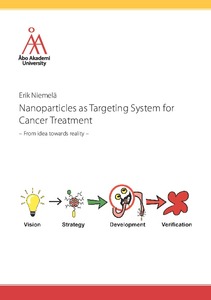 To be able to target cells of interest is one of the key aims in medicine today, because it could minimize side effects of drugs. This is of special importance in cancer therapies, were the treatment has serious side-effects on the patients healthy cells. Nanomedicine seeks to overcome this limitation by utilizing nanoparticles as drug carriers, as nanoparticles have shown considerable potential as targeted drug delivery systems and could thus be used in cancer treatment. The key is to figure out a novel way of targeting cells of interest; what are the differences in these cells that could be used as a Trojan horse for delivering the drug to the target tissue. The trick, however is to find what drug would benefit from being loaded to a nanoparticle carrier system. What drug incorporation method is plausible, what pore size can harbor that specific drug, what particle size would be optimal to be internalized without unspecific uptake? What kind of surface functionalization would yield the highest uptake in the cancer cell of interest and what could be the potential unwanted off-target effects?
In this thesis, we exploited the increased metabolism of cancer cells and high replication rate for designing mesoporous silica nanoparticles (MSNs) for targeted drug delivery. The faster a cell grows and divides, the higher the metabolism rate and DNA synthesis is, and thus, increased uptake of both glucose and folate molecules occurs. We used these cancer specific traits aiming for actively targeted drug delivery by either functionalizing the particle with sugar moieties, folic acid or its antagonist methotrexate. Subsequently, by loading the particles with molecules that intervene with processes that are more pronounced in cancer cells than healthy cells, it was possible to increase drug selectivity and efficacy even further.
In the first study, we loaded the particles with celastrol, which is an active molecule used in traditional Chinese medicine that has the ability to induce cell death in cancer cells that have a high rate of mitosis through destabilizing the mitotic spindle. In the second study, we utilized celastrol’s ability in lower dosages to induce the heat shock response which could be beneficial in cells that suffer from protein aggregates, as increase in heat shock proteins can help remodel these aggregates back to their native form. This kind of targeted heat shock response could be beneficial for patients suffering from neurodegenerative diseases such as Alzheimer’s and Parkinson’s. In order to identify the cells that have induced the heat shock response, we created a tailor-made automated image analysis workflow based on the freely available BioImageXD software that can be used for numerous biological scenarios.
In the third and last study, we conjugated the nanoparticle with methotrexate (MTX) that acts as a folic acid antagonist and have been used in decades for chemotherapy; in this manner, we can create a targeting ligand that has an efficacy by itself. The benefit of using MTX as targeting ligand is that it opens the possibility to load the nanoparticle with a second active molecule that would further increase the efficacy of the treatment. This multidrug-loaded nanoparticle could be used for metastatic cancer therapy when conventional cancer treatments have a severe negative effect on the patient. The nanoparticle would seek the metastatic cell with the targeting ligand MTX, and then together with the second active molecule, in this case fingolimod (FTY720), induce apoptosis and stop the invading cancerous cell.