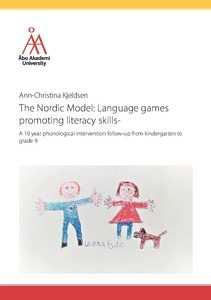 Because cracking the alphabetic code will not occur in the same way for all children, sufficiently early pedagogic interventions are of vital importance. International research inspired by the groundbreaking study of Ingvar Lundberg and his colleagues (Lundberg, Frost & Petersen, 1988) on the Danish Island of Bornholm has focused on these issues. Lundberg's phonological kindergarten intervention proved effective, removing a considerable part of the gap in reading skills which usually emerge in the early grades between normally advancing and struggling readers. The Danish model was modified into Swedish phonological language games, the so-called Bornholm Model, and was, in the present study, carried out in kindergartens and schools on the Åland Islands, an autonomous archipelago district between Finland and Sweden.
The first aim of the present thesis was to study the effect of the intervention with two different training doses of 100% and 60%. The second aim was to examine the long-term training gains in word reading and reading comprehension through grades 1 to 9. Finally, the third aim was to examine the reading development of trained and untrained children-at-risk for reading difficulties. The training program followed the original Danish Bornholm model (Lundberg et al., 1988) and consisted of metalinguistic games and practices, which were given in 15-20 minutes daily sessions during the last year in kindergarten to 6year old children and continuing during the first two months in the beginning of grade 1. The program advanced in a hierarchic and structured manner. Altogether 209 students, comprising two thirds of an annual age cohort on Åland Islands, were assessed in specific and general language skills at the beginning and at the end of the last year in kindergarten before the school start at age 7. After this their reading and spelling skills were assessed six times through compulsory school until grade 9, when 191 students were still participating in the study. In the present thesis, it was shown that the gains of phonological kindergarten training on subsequent reading skills, can be obtained both with a 100% and 60% training dose. Both mainstream readers and readers-at-risk for reading difficulties benefitted from the kindergarten training. It was also shown that the intervention had an effect on decoding through grade 6 and on reading comprehension through grade 9, albeit quite small effects. Regarding readers-at-risk there were approximately half the amount in the trained condition compared to the control condition from grade 1 based on the results in decoding in grade 1 and reading comprehension through the grades 6 and 9. It was shown that the initial level of training gains in phonological awareness and word decoding at the end of kindergarten and in grade 1 kept its position throughout the school grades. The results are discussed in terms of metacognitive insights into reading that are stimulated through strictly systematic kindergarten training in phonological awareness.
It is of vital importance that responsible individuals in the school systems secure a continuous, evidence-based and good-practice pedagogy for the best learning environments through national, district and local school curricula. Subsequently, when a co-operating networking is in place between reading researchers, school administrators, principals and finally teachers at all levels who work directly with children, this will promote children´s literacy achievement from the early years on. The best investment for the future is well functioning education system, where reading and spelling is vigorously targeted.