‘The Golden Chain of Pious Rabbis’: the origin and development of Finnish Jewish Orthodoxy 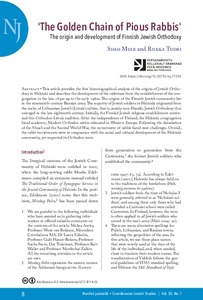 This article provides the first historiographical analysis of the origins of Jewish Orthodoxy in Helsinki and describes the development of the rabbinate from the establishment of the congregation in the late 1850s up to the early 1980s. The origins of the Finnish Jewish community lies in the nineteenth-century Russian army. The majority of Jewish soldiers in Helsinki originated from the realm of Lithuanian Jewish (Litvak) culture, that is, mainly non-Hasidic Jewish Orthodoxy that emerged in the late eighteenth century. Initially, the Finnish Jewish religious establishment continued this Orthodox-Litvak tradition. After the independence of Finland, the Helsinki congregation hired academic, Modern Orthodox rabbis educated in Western Europe. Following the devastation of the Shoah and the Second World War, the recruitment of rabbis faced new challenges. Overall, the rabbi recruitments were in congruence with the social and cultural development of the Helsinki community, yet respected its Orthodox roots.