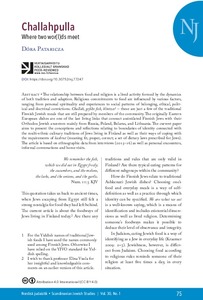 The relationship between food and religion is a lived activity formed by the dynamics of both tradition and adaption. Religious commitments to food are influenced by various factors, ranging from personal spirituality and experiences to social patterns of belonging, ethical, polit­ical and doctrinal convictions. Challah, gefilte fish, blintzes – these are just a few of the traditional Finnish Jewish meals that are still prepared by members of the community. The originally Eastern European dishes are one of the last living links that connect assimilated Finnish Jews with their Orthodox Jewish ancestors mainly from Russia, Poland, Belarus, and Lithuania. The current paper aims to present the conceptions and reflections relating to boundaries of identity connected with the multi-ethnic culinary traditions of Jews living in Finland as well as their ways of coping with the requirements of kashrut (meaning fit, proper, correct; a set of dietary laws prescribed for Jews). The article is based on ethnographic data from interviews (2015–16) as well as personal encounters, informal conversations and home visits.