A Network Model towards Strong Controllability of Biological Networks 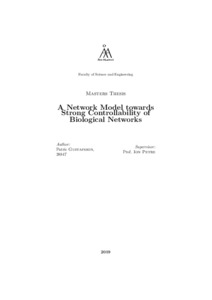 In systems biology, we study structures and networks with the goal of achieving an understanding of the system as a whole. The networks we study are often biological networks, say cancer networks. When we understand how these systems evolve over time and what their characteristics are, we can think about controlling the network to a specific state. Identification of new drugs and treatments is one application of network controllability, where if we can show how to control the system into a healthy state, we can then develop a drug that mimics that behavior.

The model we introduce is called strong regulatory graphs. Our model is defined on the already well-established gene-regulatory networks. We show that the model is well-defined and produce non-trivial state spaces. We apply the model on a small cancer network and compare the state space to a majority voting based Boolean network model.
We also introduce a concept called target attractors that serve as this thesis’s
major contribution towards strong controllability. And since much theory has been developed for Boolean networks we also introduce a transformation from our model into a Boolean network that preserves the transitions and attractors.
Finally we present some open research problems related to strong controllability that can be good venues for further research.

In addition to the theoretical part we also introduce a software tool that we
have developed that can help with the analysis of the models. The tool can
show, simulate, analyze and control networks. The software is multi-platform
and can be run on any modern computer without the need to install additional
software.