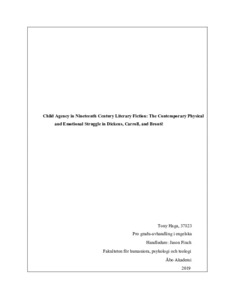 This thesis revolves around childhood as perceived in the Victorian period and the ways this perception of childhood is visible in the contemporary works of fiction written during the nineteenth century, as well as the opportunities children of the time had to act in accord with their own wishes. By looking at the contemporary views of childhood and putting the contemporary literature into that context, one can see how the literature of the time and the views of childhood portrayed within were shaped by the reality the authors lived. The works covered in this thesis are Charlotte Brontë’s Jane Eyre, Lewis Carroll’s Alice Adventure in Wonderland and Through the Looking-Glass, and Charles Dicken’s David Copperfield and Great Expectations.

The Dickens novels are deeply rooted in the Victorian class system, which shows how much a child’s ability to act in the world was predicated on which family circumstances a child was born into, as well as how children might be of higher status and authority than certain adults if they are born into the upper classes. Likewise, if a child was born into a lower-class family, their ability to act and realise themselves in the world would be very limited, as they might have to sacrifice any form of education to work and support the family. The novels by Dickens also present a question of identity in relation to class and economic circumstances. Figuring out one’s identity and place in the world is also a key part of childhood. In Alice Adventures in Wonderland and its sequel Through the Looking-Glass, Alice goes through worlds in which she only interacts with adults while constantly questioning her own identity. Her adventures in the nonsensical Wonderland is an allegory of the child traversing the unknown adult world with its own set of rules which may seem nonsensical to a child.

Another factor to consider is the child as an agent in the society he or she lives in. The school can be viewed as a microcosm of society and both Dickens and Brontë mention several aspects of school life in their novels, based upon the memories of school from their own lives. Both authors had several awful school experiences in their lives that they mirrored in their works of fiction. Much like Dickens initially went to a school filled with horrible teachers, so too did David Copperfield initially go to a school with physically dominating teachers which showed the powerlessness of a child in society compared to adults. It is, however, during David’s time at school he is introduced to the character of Steerforth, an upper-class child who illustrates the monetary and class aspect of the power dynamics of their contemporary world, which makes the structures of power between children and adults, as well as the power dynamics between children, more complex.