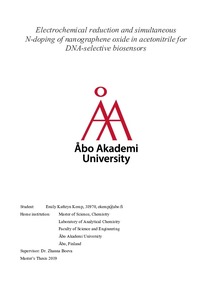 Graphene and its derivatives have been a focus of research for a number of years due to their enhanced surface area and electrical conductivity making them a viable candidate for electrochemical sensing. Previously, the preparatory method for a DNA-selective biosensor based on electrochemically reduced and N-doped nanographene oxide (RNnGO) displayed a high degree of irreproducibility, low target DNA detection rates and minimal signal response. The objective of this work was, therefore, to prepare RNnGO to be further used in an electrochemical biosensor that would improve sensor reproducibility as well as the selective detection of target DNA. The drop-casting method was used to modify glassy carbon electrodes with a film of nanographene oxide (nGO) where maximum surface coverage was determined to be reached with 17 5-uL aliquots of nGO in aqueous solution cast to the electrode surface followed by annealing for 1 hour at 60C. Characterization by scanning electron microscopy showed that the annealing process aided in the evaporation of remaining aqueous solution resulting in increased surface roughness compared to not annealed nGO. The optimized drop-casting method greatly minimized deviations between electrodes as well as increased the charge capacity of the RNnGO films. The nGO films were reduced in the presence of acetonitrile in order for N-doping of the material to occur. The resulting RNnGO films were characterized by cyclic voltammetry and electrochemical impedance spectroscopy and compared to reduced nGO in order to determine the effects of N-doping on the material’s electrochemical properties. The introduction of N-atoms resulted in a slightly negative charge of the surface and a higher conductivity. For use as DNA-selective biosensor, single-stranded probe DNA was immobilized on the surface using crosslinking chemistry via the primary amine groups present in the surface and the thiol groups present at one end of the DNA probe. Areas left bare by a lack of N-atoms available for DNA probe immobilization were best blocked by calf-thymus DNA due to its length and flexibility allowing for a high conformity to the surface. Target DNA in the sample was detected by cyclic voltammetry after hybridization with probe DNA via charge transfer of [Ru(NH3)6]3+ cations intercalated within the negatively charged DNA backbone. The window of potentials for reduction and N-doping of nGO was varied in order to identify the potential window that resulted in the highest signal amplification and rate of successful detection of target DNA. An applied reduction potential of -2.215 V was found to provide the optimum degree of N-doping which resulting in a 69% increase in surface charge after immobilization of the DNA probe, analogous to an increase in DNA surface density. DNA-selective sensors prepared using these experimental methods resulted in a successful target DNA detection rate of 100% and an increase in positive signal amplitude by a factor of 1.5.