THEATERS AND THE DIGITALIZATION OF THE ORGANIZATION : AN EXPLORATORY RESEARCH INTO THE ATTITUDE AND READINESS TO DIGITALIZATION IN THE FRAME OF CREATIVE WORK 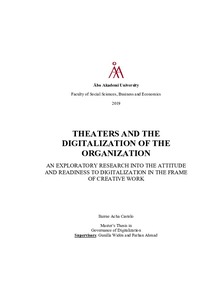 Digital tools allow humans to interact with each other through technology, in ways that could have never been thought of. Hence, this new way of data production, collection, management and sharing has created a dependence on digital technologies, as humans cannot compete with the speed and capacity of computers. In fact, information has become one of the most valuable assets of modern businesses and they require effective solutions that allow them to efficiently manage and communicate that information and knowledge, which has been retrieved from the vast amount of data collected through their various business processes. For this reason, Information Technologies (ITs) and Information Systems (IS) are high in the agenda of successful organizations. An uncountable number of researches have been carried out on this topic. And several models have been developed in order to help businesses and corporations improve and succeed on their digitalization journey. However, it has been noticed that little research has been done on this matter in the scope of creative work. Relatively few works have been found in relation to theaters and the digitalization of the organization. Whereas, countless studies have been executed on the digitalization of performances. This thesis’ purpose is to objectively study the position that theaters have towards the digitalization of the organization, and the research will be conducted through a deep examination of previous researches on this topic and through a careful analysis of empirical evidence, which has been collected through rigorously chosen data collection methods. In fact, the empirical evidence has been gathered from the direct source; that is, by surveying and interviewing theater employees. Some of the concluding statements are that theater employees do not perceive their industry is positioned in the forefront of digitalization; yet, most of them are supporters of digitalization. Most theaters are already using IS, but they are not making the most effective use of it, thus, the research also aims to present few suggestions to overcome the challenges (e.g. that theaters must dispatch the idea of isolating IS and IT governance to solely the people using those tools and that they should put the user in the center of the matrix). Additionally, no correlation has been found between being in support of digitalization and variables such as employees’ age or theater’s size. Consequently, even though this research does not present a formal statement nor official conclusion on a hypothesis, mostly because its many limitations, the empirical study of theaters’ position towards the digitalization of the organization combined with the application of the literature review has provided a considerable canvas for interpretation and has led to a series of new formal assumptions (which are now based on evidence) to be taken into further research. For example, in future researches the situation of theaters in different countries could be contrasted and compared, or the opinions of actors and technicians studied.