A CRITICAL ANALYSIS OF THE ‘TROKOSI’ PRACTICE IN PARTS OF WEST AFRICA AS A HARMFUL TRADITION AGAINST WOMEN AND GIRLS : STATES OBLIGATIONS UNDER INTERNATIONAL HUMAN RIGHTS LAW 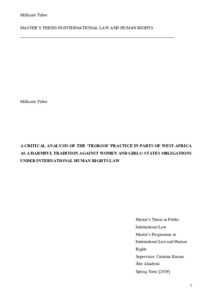 Trokosi is an old West African traditional practice that involves the sending of young female children, particularly virgins to a shrine to serve as atonement, for a crime committed by a family member. It is practised in various West African States such as Ghana, Togo, Benin and parts of Nigeria. There are several perspectives from which this practice has received debates over the years. The major debate stems from the universalists and cultural relativism discourses. The universalism perspective of human rights is basically an opposition of the practice on account that, the practice is harmful and constitutes grave violations of the human rights of women and girls such as the right to be free from slavery and forced labour, discrimination based on gender, all forms and harm and abuse as well as torture and other cruel, inhuman or degrading treatment or punishment. Following the above argument, the universalist approach seeks to protect the right of the child through the eradication of the practice using a human rights based approach which involves the due diligence principle of states to prevent acts of violence, protect acts of violence, protect victims, prosecute and investigate the incidence of violence and provide redress to the victim for the harm suffered. On the other hand, cultural relativists are of the view that the given norms of a particular culture are the grounds on which a society should be judged as there are no absolute principles because different cultures have different moral beliefs. There are also various inconsistencies in the effective implementation of international human rights standards which creates a barrier in the elimination of the harmful traditional practices and in this context, the trokosi practice. One such obstacle is that the practice is deeply embedded in the traditional values of the societies who practice it.
The present thesis is an attempt to examine states obligations under international human rights law in the context of the trokosi practice. The due diligence principle in assessing a state’s compliance with taking appropriate measures to respond to harmful traditions will also be analyzed. The major instruments used throughout the thesis is based on international and regional legal frameworks such as the Convention on the Elimination of all forms of discrimination against women, the Convention on the Rights of the Child, the African Charter on Human and People’s Rights, and the International Covenant on Civil and Political Rights. The current research is relevant for understanding the reasons for the prevalence of harmful traditions in West Africa despite efforts made at the international level to combat violence against women. The paper makes further recommendations on measures that can be undertaken to eradicate the trokosi practice. This research concludes that this practice is a violation of the human rights of women and states are therefore under the obligation to prevent women from all forms of violence including harmful traditions.