In Whose Honour? : Understanding Native American Sports Mascots, the Washington Redskins, and the Divisive Online Discourse About Them 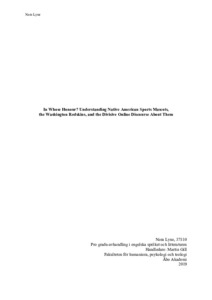 The study is qualitative in nature, and the primary material was obtained from the online platform Reddit by using the search terms “native american mascot” and “washington redskins name”. The results were categorized based on theme and argument, and a few common tendencies emerged.

The material gathered from Reddit showed that defenders of the practice describe Native mascotry as an attempt to honour Native Americans, accuse mascot critics of being overly sensitive or too politically correct, and appeal to bigger, more important issues facing Native American communities. Mascot opponents, on the other hand, refer to the offensive nature of the word redskin, accuse the mascots of perpetuating Native stereotypes, and make comparisons to a variety of fictional, race-based team names in an attempt to point out the absurdity of the Washington team’s name.

The results suggest that the mascot issue is highly controversial, as well as emotional, and the discourse around the topic is littered with frustration, anger, and defensiveness. The topic is complex, since it deals with issues of cultural identity, racism, and appropriation, and is thus both difficult to solve and vital to understand.