Drink tea, coffee or chocolate, or some other cooling infusion! : A Corpus Study of the Words Tea, Coffee, and Chocolate 1640-1920 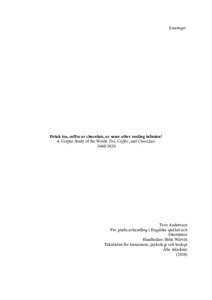 This is a historical corpus study of the words tea, coffee, and chocolate, examining the occurrence and semantic changes between 1640 and 1920. The uses of these words are also investigated in a sociohistorical and cultural context: in what ways do the uses of these words by men and women differ, and what does the use of these words in texts say about the English society between 1640 and 1920?
The concordance software WordSmith Tools has been used to find occurrences of the words including spelling variations and compounds in a historical corpus of 12.2 million words. The findings were sorted into categories of meaning varying from ‘produce’ to ‘social events’, verbs and colours, among others.
The analysis has two parts: first, meaning and prevalence, and secondly, sociolinguistic aspects, genre, and the impact of the empire on life in Britain. Over all, it was found that tea was in markedly more frequent use than coffee and chocolate even though it took longer for tea to become a staple commodity in Britain. The growth in occurrences of the words fits well with the cultural and social history of the goods they refer to. In comparison with coffee and chocolate, tea is more often used to denote something other than just the actual drink, such as a mealtime or a social event or even as a verb. However, even though there is a growing number of different compounds based on the words tea, coffee, and chocolate over the period of the study, it is only the most basic ones that remain popular. Likewise, even though the meanings of the words tea, coffee, and chocolate widen, it is the most typical semantic meanings that are most frequent even in the later periods.
While the corpora were not created for sociolinguistic studies, some conclusions can still be drawn. Most interestingly, it was found that men tended to use the word coffee more than women, and more often in connection to places outside the home. Correspondingly, tea was more frequently used by and in relation to women in a domestic setting than coffee and chocolate.