The Impact of Digitalization on Creative Economy : How Digital Technologies Enable to Increase Creativity Value 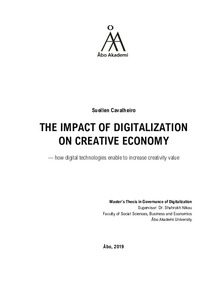 It was over two decades ago when the Department of Culture, Media and Sport of British government disclosed the concept of creative industries. Since then, several countries have adopted directly or indirectly its idea in their political and economic measures as a way of preserving the local culture and supporting of the wave of technological innovation that the world has witnessed in the following years. As the concept gained traction globally, it also expanded its breadth and the issues that have risen since its emergence around a precise coherence on its definition, which has become even more challenging to answer nowadays. The analysis of the literature on the subject reveals that many were the efforts for a more evident understanding between “the art” and culture in contrast to creativity consumed as a commodity. Although the opinions are still diverse in this context, the discussion has provided greater clarity to the studies in the field of media, communication, and cultural studies. A topic even in need of a broader debate is the effects that the technological digitization itself and its tools made available to broaden the concept of the creative industries. This thesis provides research on impacts of digitalization for the creative and cultural industries through the interviewee with freelancers and SME from creative segments. Interviews were conducted with 65 creative workers distributed in 28 countries around the globe. They were asked about the value chain processes of their work, how creativity and digitization can be evidenced as a resource for such processes, and the advantages and disadvantages of their creative, physical and online community interactions. The purpose of this thesis is to bring the perspective of these workers and are often not included in government and institutional research due to the difficulties in measuring their data. The results reflect the day-to-day situation of such professionals who frequently use digital tools and environment for their professional activities and are more susceptible to the issues of digitalization. A brief analysis of the participants' perspectives on copyright laws is also included within the scope of this article. The interviewees speak openly about their own lack of knowledge regarding these laws, the difficulty of accessing and understanding legislative texts, and suggestions for improvements to the regulations in their areas of work. This thesis presents results that broaden the academic discussions for the CCI and provide empirical material that can be used in practical measures to solve problems faced by creative workers due to the impacts of the digitization.