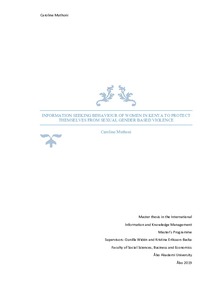 Sexual gender based violence against women occurs reqularly in Kenya. Although numerous research has been conducted in the area of sexual gender-based violence, sexual gender-based violence in relation to HIV and sexual gender-based violence and legislation, the role that information plays in regards to addressing the problem has not been specifically studied. Kilonzo, Ndung’u and Nthamburi, (2009) argue that attaining the benefits of legislation and ensuring the privacy, informational and medical needs of survivors and their access to legal processes and protection still remains an enormous challenge in Kenya.
The purpose of this study is to explore how women in Kenya seek information to protect themselves from sexual gender-based violence. The study uses Wilson’s 1981 second model of information-seeking behaviour to conceptualise information seeking behaviour.
Data was collected through a self-completion questionnaire administered online to a sample of Kenyan women, and 24 participants responded to the survey. The research seeks to address the following questions:
1. How do women in Kenya seek information to protect themselves from sexual gender-based violence?
2. Where do they get that information, if at all?
3. What impact does that information have on their lives, if at all?
The findings indicate that to protect themselves from sexual based-gender violence (SGBV), women in Kenya seek information and help through informal sources e.g. family, friends, and formal sources e.g. medical practitioners such as doctors, nurses, gynecologists and obstetricians. Additionally, they turn to other information sources such as radio, television, smart phones, books, newspapers/magazines, and the internet.
The findings also indicate that the internet, smartphone and books are the most turned to sources of information on SGBV due to the convenience, privacy and anonymity they offer to respondents. Therefore multisectoral programmes and policies aiming to create effective interventions can be directed through these channels.