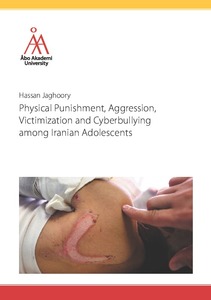 The studies in the current thesis investigated adolescent aggressive behavior and victimization from peer aggression (Studies I and II), cyber bullying (Study III), and peaceful conflict resolution (Study IV) in school settings in present-day Iran. Study I and II focused on certain forms of extreme brutal physical punishment at home and at school by adults, and their relationship to aggressive behavior and victimization at school. In Studies III and IV, the findings from Iran were compared with similar data from an adolescent sample from Finland.
Study I was based on data from 1,244 young adolescents (649 boys, 595 girls; M age = 12.7 years, SD = 2.1 years) collected in two cities, Mashad and Eylam, in both public and private schools (totaling 24 schools) in Iran. It investigated whether pupils in the schools reported having been exposed to extreme forms of physical punishment (EPP) by parents, such as burning of hands, and breaking of bones. The results showed that 6.5% of the respondents had had their hands burnt (6.5 % of respondents), and bones broken (4.9 %) as punishment at home. These adolescents scored significantly higher on both perpetration of and victimization to all types of aggressive behavior at school that were measured: physical, verbal, and indirect aggression. Notably, EPP had strong associations with the most severe forms of school aggression measured in the study, i.e. threatening (and, respectively, being threatened by) another pupil with a knife or a chain.
Study II investigated how common it was for pupils to experience extreme forms of physical punishment at school, such as the burning of hands, or having their bones broken, by teachers in Iran. Data were collected from the same sample of 1,244 young adolescents from the cities of Mashad and Eylam in Iran. The results showed that 3.8% of the pupils had had their hands burnt, and 4.8% had had their bones broken by teachers, as punishment. The respondents who had experienced such extreme punishments scored significantly higher on both perpetration of and victimization to almost all types of aggressive behavior at school. The study found clear associations between extreme physical punishment (EPP) by teachers and extreme forms of aggression (both perpetration and victimization) at school, such as. threatening (and, respectively, being threatened by) another pupil with a knife or a chain.
Study III investigated differences in frequencies of both victimization and perpetration of cyberbullying among adolescents from Iran and Finland. Data from a total of 1,250 adolescents (615 boys, 635 girls) of three age groups (10, 13, and 15 years of age) were collected in Mashhad, Iran (n = 630) and Ostrobothnia, Finland (n = 620). The questionnaire consisted of variables measuring various types of cyberbullying, such as sending nasty text messages, nasty e-mails, and putting up nasty pictures and films on internet. The findings of the study revealed clear cultural differences in cyberbullying patterns among adolescents of the two countries. Both victimization and perpetration of cyberbullying of all kinds were more frequent in Iran. Both sex and age differences also occurred, but they showed different patterns in Iran and Finland. Girls in Finland used cyberbullying significantly more than Finnish boys. In particular, Finnish girls sent nasty SMS messages, nasty e-mails, and put up humiliating pictures on the internet to a higher degree than Finnish boys. It appears that cyberbullying is a type of aggression that fits the mentality of Finnish girls. This sex difference was not found in Iran.
Study IV investigated self-reported conflict behavior in 1,244 Iranian adolescents (649 boys, 595 girls; M age = 12.7 years, SD = 2.1 years) and in 620 Finnish adolescents (324 boys and 296 girls; M age = 12,7 years, SD = 2.0). The adolescents filled in a paper-and-pencil questionnaire with items inquiring about how they behaved when they themselves were in conflict with their peers, and when they were witnessing conflicts between others. The results showed that the Iranian adolescents were more inclined than the Finnish ones to make compromises and resolve conflicts peacefully. This was in particular true for Iranian boys.
The four studies of the thesis indicate complex patterns of behavior that clearly differ from those of the comparison group of Finnish adolescents. Although there is no perfect theory of cultural differences, Hofstede’s (1980) categories seem to be of aid when we try to explain these differences. Of Hofstede’s dimensions, there is one which in particular seems to reflect the difference between the behavior of the Iranian and Finnish adolescents best, namely the dimension of collectivism and individualism. Iran is, according to Hofstede, a collectivistic society, while Finland, as most Western countries, is more individualistic. Another dimension which may be applied is that of power distance: Iran is more hierarchical with a greater power distance than Finland. The findings of the four studies appears to be, to a great extent, explainable in these terms.