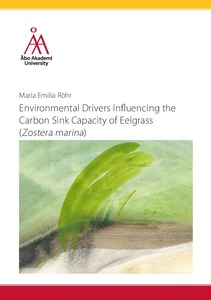 The accelerating increase of atmospheric CO2 concentrations have caused regime shifts and changes in the net carbon balance of both terrestrial and marine systems worldwide. Blue carbon, the organic carbon sequestered by vegetated coastal ecosystems such as seagrasses, salt marshes, and mangroves, accounts for over half of the carbon captured by plants on Earth. Unfortunately, large areas (>33%) of these habitats have been lost in the past 50 years. Eelgrass, Zostera marina, is among the most abundant seagrass species in the world, but until now, the knowledge base on its capacity to sequester and store organic carbon has remained unclear. In this thesis, the magnitude of Z. marina blue carbon stocks was quantified at local, regional and global scales. In addition, the abiotic and biotic factors causing variation in Z. marina carbon stocks was explored. The results from this thesis revealed that Z. marina blue carbon stocks are considerable, although variation was notable at all spatial scales studied. While the Z. marina blue carbon stocks in some regions were relatively modest, hot spots for Z. marina carbon storage were also identified, especially in the Kattegat-Skagerrak and Mediterranean regions. Furthermore, the results from this thesis revealed that Z. marina blue carbon stocks are comparable to that of tropical seagrass species, other blue carbon ecosystems and even terrestrial ecosystems. The majority of the variation in the Z. marina blue carbon stocks was explained by sediment-related attributes, i.e. mud content (particle size <63 μm), degree of sorting, and the fraction of Z. marina detritus in the sediment carbon pool. Laboratory experiments showed that the decomposition of Z. marina, Stuckenia pectinata, and Cladophora glomerata was higher in mud compared to sand. Finally, the results from this thesis revealed that organic carbon and nitrogen stocks in Z. marina sediments along the west coast of Sweden were among the highest reported for Z. marina ecosystems. The monetary value of the organic carbon and nitrogen sequestration along the Swedish west coast was one of the highest reported for an ecosystem service by seagrasses. The results of this thesis call for more efficient protection of seagrass meadows and other blue carbon ecosystems, and urge for better integration of these ecosystems into global carbon budgets.