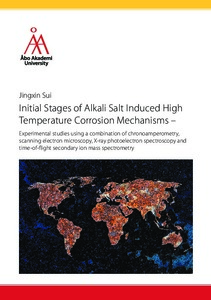 Various environmental problems, such as global warming, are related to the extensive use of fossil fuels. To solve these environmental problems, several renewable energy resources (RES) to substitute fossil fuels have drawn much attention. The renewable energy resource biomass has been widely used as an energy source via combustion to produce heat due to its CO2-neutrality, availability, and various regulatory benefits. However, biomass typically contains considerable amounts of corrosive compounds, which can be released into the flue gas during the combustion process. These corrosive gaseous species may directly cause gas phase-induced corrosion, or condense and deposit on the superheater tubes in the boiler, which then causes deposit corrosion and decreases the lifespan of the superheaters. Among the corrosive compounds, alkali salts have been cited to be the most influential corrosive species, because they exist naturally and extensively in various biomasses. Alkali induced high-temperature corrosion has been extensively studied. However, little work has been done to illustrate the mechanisms of the very initial stage corrosion reactions.
In this work, a novel combinatory analysis method combining chronoamperometry (CA), X-ray photoelectron spectroscopy (XPS) and scanning electron microscopy (SEM) is proposed. In this method, CA has been utilized to detect variations in the current flow due to oxidation/reduction reactions, allowing for time-separation of different stages at the onset of the corrosion process, whereas XPS and SEM have been used for studying morphology, thickness, and composition of the formed oxide layers. In Papers I-III, this method was developed by studying the effect of three alkali salts (KCl, NaCl and K2CO3) on the initial corrosion mechanism of a typical superheater tube material (Sanicro 28 (Fe31Cr27Ni)). By utilizing this combinatory method, the effect of the cations (K+ and Na+) and anions (Cl− and CO32−) on the initial stage of the corrosion process has been studied. In addition to the corrosive salts, the water content in the biomass fuel is usually high, thus the effect of water vapor cannot be ignored when studying corrosion during the real biomass combustion process. To interpret the role of the water vapor in the corrosion mechanism, flowing dry and humid conditions were utilized in the experiment setup in Paper IV. Since the role of water was found to be essential in the Paper IV, the role of different sources of oxygen (water and air) in the corrosion mechanism was studied more thoroughly. Thus, in Paper V, an additional technique in which Time-of-Flight Secondary Ion Mass Spectrometry (ToF-SIMS) and water with the stable oxygen-18 (18O) isotope as a tracer of the oxygen source were utilized to track the detailed reaction mechanisms involved in the oxidation/corrosion process.
From several series of laboratory tests, it was found that at both 450 and 535 °C, all three alkali salts affected the steel and initiated alkali chromate formation within the exposure time of 2 hours. The rates of the overall corrosion reaction with all studied salts were much lower at 450 °C than at 535 °C. At the higher temperature, 535 °C, the formed chromate reacted further to chromium oxide with a significantly higher reaction rate than at 450 °C, as expected.
There were clear differences regarding the impact of cations (Na+, K+) and anions (Cl−, CO32−) on the initial corrosion reaction. When comparing the effect of the two cations, the two chloride salts (KCl and NaCl) had a similar influence on the overall elemental distribution in the oxide layer. Both salts led to the formation of alkali chromate, which depleted the protective oxide layer in chromium and made the stainless steel more vulnerable to high temperature corrosion. Under dry conditions, the exposure to NaCl resulted in a higher amount of sodium chromate (Na2CrO4) and a thicker chromiumrich layer compared to the sample exposed to KCl. Under humid conditions, the exposure to NaCl resulted in a lower amount of Na2CrO4 and a thicker oxide layer with a higher concentration of iron than the corresponding layers formed during the KCl exposure.
When comparing the anions (Cl-, CO32-), the exposure to K2CO3 resulted in a much higher amount of K2CrO4 than the exposure to KCl under dry conditions. Under humid conditions, K2CO3 gave rise to a much thicker and more homogeneous iron-rich oxide layer than KCl. K2CO3 can decompose and react with iron to form multiple intermediate products, such as iron bicarbonate (Fe(HCO3)2).
The results of this work can be utilized by material designers and boiler operators to predict material behavior under different challenging conditions in biomass combustion process.