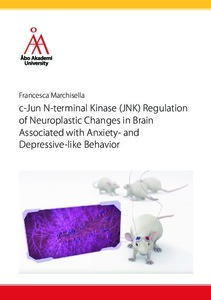 Anxiety disorders and clinical depression are leading causes of disability worldwide and affect more than 300 million people of all ages, more prominently women (World Health Organization, 2017). Comorbid depression and anxiety disorders appear in up to 75% of patients, and to further complicate the picture, higher severity and chronicity of illness, reduced quality of life, treatment resistance and poor therapeutic effects are expected when comorbidity of anxiety with depression is diagnosed.
Current therapies stimulate neuroplastic changes in the brain, as a basis for their therapeutic action. In particular, it has been shown that several classes of antidepressants stimulate adult neurogenesis in the hippocampal formation, which is one brain region mostly affected by these two conditions. Nevertheless, current pharmacotherapy conveys a number of drawbacks, including delayed onset of clinical effects and debilitating side effects. Such inefficiency is most likely due to a lack of knowledge of the neuroanatomical and physiological changes occurring during the disease state. Thereby, unravelling the etiology and the pathophysiological mechanisms leading to the aberrant cerebral activity caused by the illnesses might ultimately overcome the downsides of current therapies.
Most recently, the Mitogen Activated Protein kinases (MAPs) have been linked to the development of mood disorders. In particular, the c-Jun N-terminal kinase (JNK) subfamily of MAPKs are activated by different external stressors, such as DNA damage, oxidative stress, cytoskeletal changes, infection or inflammation, and the JNK signaling has been found to be fundamental in brain developmental processes. Moreover, JNK activity modulates brain structures and neuronal morphology. Thus, generation of JNK inhibitors has been progressing as a new attractive avenue for more targeted therapies with less adverse side effects.
The work presented in this thesis tackles the role of JNK signaling in regulation of adult hippocampal neurogenesis and in the control of anxiety-like and depressivelike behavior in mice. By using Jnk1 knockout mice and pharmacological inhibition of JNK pathway, the kinase activity was found linked to adult neurogenesis and emotional behavior in mice. More specifically, Jnk1-/- mice exhibited low anxiety-like and depressive-like phenotype in a battery of behavioral tests. Remarkably, genetic and pharmacological inhibition of JNK heightened proliferation, maturation and survival of the newly born neurons of the hippocampus and facilitated dendrite arborization of newborn neurons, suggesting promotion of integration of the adult born cells into the pre-existing circuitry of the hippocampus. Specific retroviral targeting of JNK in the adult born granule cells of the hippocampus produced low anxiety-like phenotype after four weeks of viral expression and decreased depressivelike phenotype eight-week post-injection. The last part of this thesis aimed to investigate synaptic changes of the adult born granule cells of the hippocampus upon JNK kinase inhibition. Using a calcium indicator downstream of JNK inhibition, we recorded the activity of newly born neurons in awake mice. Our preliminary data indicate that JNK inhibition appears to increase adult born granule cells synaptic activity at four weeks of age in mice undergoing social interaction, and at six weeks of age in response to open field and enriched environment exposure. Altogether, the data presented in this thesis provide evidence on JNK modulation of the neurogenic niche of the hippocampus and of the dentate gyrus synaptic activity. Furthermore, these findings highlight the JNK pathway as a putative novel drug target against anxiety and mood disorders.