Facing the problem of evil: Visual, verbal, and mental images of (in)humanity 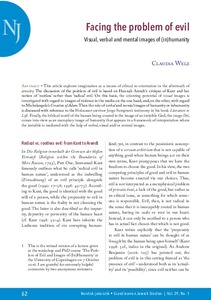 This article explores imagination as a means of ethical re-orientation in the aftermath of atrocity. The discussion of the problem of evil is based on Hannah Arendt’s critique of Kant and her notion of ‘rootless’ rather than ‘radical’ evil. On this basis, the orienting potential of visual images is investi­gated with regard to images of violence in the media on the one hand, and, on the other, with regard to Michelangelo’s Creation of Adam. Then the role of verbal and mental images of humanity or inhumanity is discussed with reference to the Holocaust survivor Jorge Semprun’s testimony in his book Literature or Life. Finally, the biblical motif of the human being created in the image of an invisible God, the imago Dei, comes into view as an exemplary image of humanity that appears in a framework of interpretation where the invisible is mediated with the help of verbal, visual and/or mental images.