Maintainability of an RPA System Managing Termination of Insurance Policies 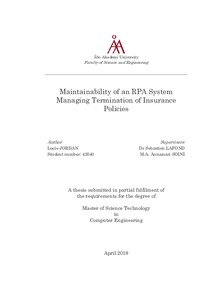 Defined as the ease with which a code can be read, understood, reused, modified, and tested, maintainability is a major quality attribute. Indeed, an easily maintainable project is more likely to have a long lifetime than a project with low maintainability. In industry, systems with the highest lifetime probability are preferred, since the project may be subject to modifications and corrections of anomalies. That is why it is essential for the system to be easily maintainable.
Besides, use of Robotic Process Automation (RPA) within companies is becoming more and more frequent. RPA, regarded as a cousin of AI, consists in reproducing through computer processing the tasks usually performed by a human, and gradually begins to replace white-collar workers to perform repetitive tasks. This allows the company to both save money and reduce their employees’ workload.
With the entry into force of a new law, the “loi Hamon”, French insurers are spending more and more time terminating contracts, a task with a low added value. To address this situation, the implementation of a software robot, based on RPA and performing the termination of insurance contracts, has been studied, while focusing on the maintainability of the system. To perform these terminations, a batch process was implemented in order to reproduce the usual employee’s process on the internal system of an insurance company. The limited budget being a major constraint, Selenium, a free and open source tool, was used as an alternative to the existing RPA tools.
Metrics such as LOC’s, cyclomatic complexity of the code, and code smells were used to perform the analysis of the implemented system. The analysis of the system implementation has shown that the system is sufficiently maintainable, although it has been suggested that it could have been improved by modularising it differently. Future studies on a similar system could focus mainly on the limitations of Selenium WebDriver as an alternative to the RPA tools available on the market.