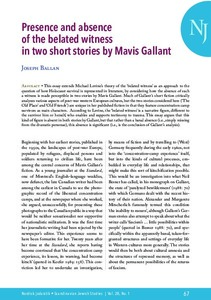 This essay extends Michael Levine’s theory of the ‘belated witness’ as an approach to the question of how Holocaust survival is represented in literature, by considering how the absence of such a witness is made perceptible in two stories by Mavis Gallant. Much of Gallant’s short fiction critically analyzes various aspects of post-war western European cultures, but the two stories considered here (‘The Old Place’ and ‘Old Friends’) are unique in her published fiction in that they feature concentration camp survivors as main characters. According to Levine, the ‘belated witness’ is a narrative figure, different to the survivor him or herself, who enables and supports testimony to trauma. This essay argues that this kind of figure is absent in both stories by Gallant, but that rather than a banal absence (i.e., simply missing from the dramatis personae), this absence is significant (i.e., is the conclusion of Gallant’s analysis).