Swedish interventions in the tragedy of the Jews of Slovakia 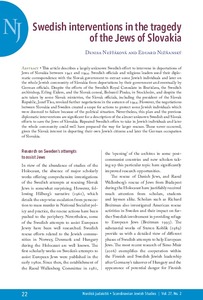 This article describes a largely unknown Swedish effort to intervene in deportations of Jews of Slovakia between 1942 and 1944. Swedish officials and religious leaders used their diplomatic correspondence with the Slovak government to extract some Jewish individuals and later on the whole Jewish community of Slovakia from deportations by their government and eventually by German officials. Despite the efforts of the Swedish Royal Consulate in Bratislava, the Swedish arch­bishop, Erling Eidem, and the Slovak consul, Bohumil Pissko, in Stockholm, and despite the acts taken by some Slovak ministries, the Slovak officials, including the president of the Slovak Republic, Jozef Tiso, revoked further negotiations in the autumn of 1944. However, the negotiations between Slovakia and Sweden created a scope for actions to protect some Jewish individuals which were doomed­ to failure because of the political situation. Nevertheless, this plan and the previous diplomatic interventions are significant for a description of the almost unknown Swedish and Slovak efforts to save the Jews of Slovakia. Repeated Swedish offers to take in Jewish individuals and later the whole community could well have prepared the way for larger rescues. These never occurred, given the Slovak interest in deporting their own Jewish citizens and later the German occupation of Slovakia.