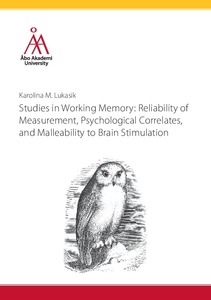 Working memory (WM) refers to the temporary memory system that enables us to maintain and manipulate currently relevant information. As a key aspect of human cognition, it is associated with several other abilities and achievements, such as general intelligence, language learning, emotional control, and academic performance. The present thesis addressed three issues concerning WM, ranging from measurement to intervention: the reliability of its measures, psychological correlates, and malleability to brain stimulation. First, using data from laboratory studies, the test-retest reliability of commonly used WM and other executive tasks was examined. This issue has received scant research attention, even though it is crucial for the use of these measures. Second, three separate studies, employing a large online sample of adults, probed the relationships between WM and selected psychological factors (personality traits, psychological well-being, and bilingual experience). Third, the malleability of verbal WM performance to stimulation of WM-related left inferior frontal regions was probed with transcranial direct current stimulation (tDCS).
The reliability analyses indicated considerable variability of test–retest reliabilities in executive measures, with highest test-retest reliability values for the WM tasks. In the online study, WM was measured by factor-based composite scores (verbal WM, visuospatial WM, and updating ofWM contents). Concerning the psychological factors and WM performance measures, only weak associations were found. Personality traits Conscientiousness and Openness had small but statistically significant negative associations with WM updating. Concerning stress and anxiety, there was only a trend towards a negative effect of transient anxiety on WM performance. With regard to linguistic background, late bilinguals outperformed early bilinguals and monolinguals on WM updating. However, within the bilingual groups, no associations were found between WM task performance and central features of bilingual experience. The tDCS study failed to find any significant effects of left prefrontal cortex stimulation on WM performance.
In conclusion, WM measures (but not some other executive measures) show mostly reasonable reliability that speaks for their continued use. In the present non-clinical samples of adults, WM performance appears to be rather robust against measurement error, normal inter-individual variability in some pertinent psychological factors, and excitatory brain stimulation as applied by tDCS.