Valuable monomers and oligomers from hemicelluloses 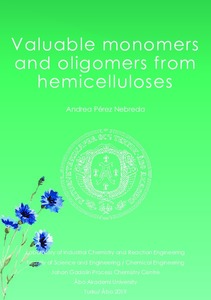 Current environmental problems such as global warming and climate change related to greenhouse gas emissions have enhanced industrially relevant research aimed towards a more sustainable future. The biorefinery concept plays a key role in the development. Lignocellulosic biomass is the most abundant renewable resource on the earth and it can be potentially converted to different biofuels and biochemicals, which diminishes the current dependence on fossil feedstocks. Lignocellulosic biomass is composed of three major constituents: cellulose, hemicellulose, and lignin. Hemicelluloses can account for up to 20-40% of the total dry weight of lignocellulosic materials and this fraction is very often underutilized in industry. However, hemicelluloses are heteropolysaccharides which can be cleaved into their monomeric constituents yielding different pentose and hexose sugars, which can be further be transformed into fuels and chemicals.
Hemicelluloses can be obtained from biomass by different pretreatment methods, in which the biomass is selectively fractionated into its different constituents. Pressurized hot water extraction (PHWE) is a method which can be utilized for extracting hemicelluloses without degrading the extracted sugars. Water is used as a solvent, which makes the process environmentally friendly. The extraction of hemicelluloses by PHWE from stone pine, holm oak and Norway spruce was investigated in the current work. The main experimental parameters were the effect of temperature, raw material, and the solid-to-liquid ratio.
The hydrolysis of two structurally different hemicelluloses was studied in different reactor configurations in the presence of acidic catalysts. Oacetylgalactoglucomannan and inulin were selected as model substrates as they differ significantly from each other; the former being a large, branched and complex molecule while the latter is linear and significantly simpler. The reaction products were mainly sugar monomers.
Hydrolysis of the hemicelluloses using a homogeneous acid catalyst (HCl) was studied in a continuous tubular reactor. The experimental conditions influenced significantly the conversion and product distribution, and the influence of the different parameters on the reactor performance was systematically investigated. Continuous production of sugar monomers without degradation to low-molecular products was achieved in optimal conditions.
The reaction mechanisms and the kinetics of inulin hydrolysis to fructose in the presence of a solid catalyst (cation-exchange resin) were studied in a batch reactor. A detailed mathematical model was successfully utilized for describing the intrinsic kinetics of the hydrolysis.
The kinetic data obtained were subsequently used to design a continuous reactor system of the packed bed type. The continuous reactor developed in this work was equipped with intermediate sampling points between the catalyst beds, which enabled following the progress of the hydrolysis along the reactor. High fructose yields were obtained in the hydrolysis of inulin. Detailed flow characterization was carried out, taking into account mass transfer limitations. An advanced mathematical model comprising kinetics, mass transfer phenomena, and flow characteristics in the reactor was developed and solved numerically. The model was well able to describe the performance of the continuous fixed bed reactor.
Overall, the results obtained in the current work demonstrate the feasibility of the efficient hydrolysis of hemicelluloses in a continuous reactor using a heterogeneous catalyst and they contribute to designing and evaluating the performance of the process.