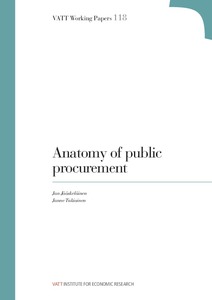 We provide novel stylized facts about competition, bidding, entry and bidders across a wide spectrum of public procurement auctions using comprehensive and rich Finnish data. Competition for publicly procured contracts is relatively low with a median bidder count of two (three conditional on receiving any bids). Bidders typically are very heterogeneous in size, which likely limits competition further. Competition seems to work roughly as expected as on average (standardized) bids mainly decrease with the number of actual and potential bidders. Using information on registrations as a good proxy for potential bidders, we show that the ratio of actual to potential bidders increases with the number of actual bidders. We also show that being present in the contracting authority's municipality or province correlates positively with registering, entry (bidding) and winning, but other firm characteristics matter less. While attracting more competition by means of contract and auction rule design is a desirable policy goal and we show suggestive evidence that the use of scoring rule can be an entry barrier, increasing competition may be in practice difficult. Therefore, reservation prices may be a more useful policy tool to alleviate issues associated with the lack of competition.