Codeswitching in the chat forum Jodel 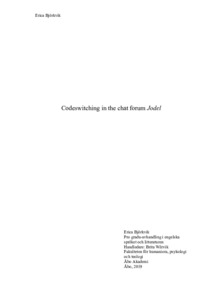 In this thesis the relationship between the English and the Swedish language is studied in written online discourse. I am interested to find out how these languages interact with each other online. The purpose of my thesis is to study how and why people codeswitch in written discourse in a specific type of computer-mediated communication, namely the online chat forum Jodel.