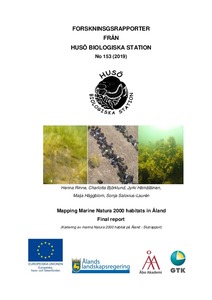 In 2016-2018 marine geological and biological surveys were carried out in the Åland Islands, in a project financed by the European Maritime and Fisheries Fund and the Government of Åland. During the project, special emphasis was set to mapping sandbanks (1110) and reefs (1170) as defined in the Habitats Directive, as well as esker islands (1610) and boreal Baltic islets and small islands (1620), including their underwater parts. The geological surveys covered five study areas in the eastern archipelago, including also Lumparn, while biological sampling covered larger areas from the southern coast (Eckerö) to Kökar and further to northeastern Vårdö.

The surveys revealed eelgrass (Zostera marina) meadows in association with the esker islands, along the esker formation that runs in a SE-NW direction from eastern Kökar all the way to Vårdö. There were also sandbanks along the esker formation. Rocky reefs and Boreal Baltic islets and small islands are very common habitats in the Åland archipelago, and they were found to be especially representative in the northeastern part of the surveyed area. In the southeast, the bladderwrack (Fucus vesiculosus) occurred rather seldom on the rocky bottoms, indicating a poor status of the species in the area. Parts of the southern archipelago had diverse red algal communities, but further studies are needed to clarify their distribution. In northern Lumparn, abundant domes formed by biogenic gas were found during the geological surveys. The shallow nearshore areas of Lumparn were often sandy with eelgrass meadows.

Based on the results, areas of particular interest due to high nature values and/or rare geological features are presented in the report.