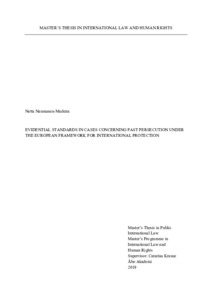 This study responds to the need to clarify the content and scope of evidential standards – the burden of proof and the standard of proof – in cases of international protection where the applicant has been persecuted before applying for asylum. The approach to evidence in cases of past persecution has fueled discussion among legal practitioners, and diverging approaches have emerged in the court practice of European states.

The European Court of Human Rights has addressed on the issue of evidential weight attached to past persecution in its recent judgements. The inspiration for this development has its background in European asylum law, which has emerged within the Common European Asylum System of the European Union. First, this thesis examines and analyses the current content and scope of the standards in cases concerning past persecution in the practice of the ECtHR and CJEU by use of legal dogmatics. The analysis is carried out in order to have a framework for the examination of national systems.

Secondly, this thesis examines the practice in two selected European states, Germany and the United Kingdom. It analyses the ways in which evidence is approached in cases of past persecution in the practice of the appellate courts of these selected states and examines the way in which the evidential weight to past persecution is provided in the assessment. By bringing under comparison the approaches in these selected countries, this thesis concludes that the legal tradition impacts the evidential method.

This thesis argues that the reason behind the difference in approach is that as part of the practice national courts apply evidential tools that provide the best fit in their own legal culture. Also, a key feature in the difference of an approach is whether the assessment is regarded to include separate stages or whether it is approached as a holistic one on which no legal outline exists. Finally, this thesis highlights that procedural quality ought to be taken as a leading principle in adjudication of cases of past persecution in order to guarantee the legal certainty in decision making which concern applicants whose positions differ in substance as well as procedurally due to past grievances.