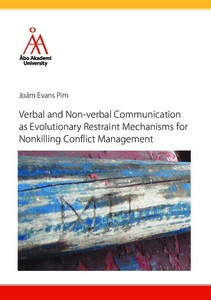 Across species, unrestrained aggression among con-specifics has been strongly selected against due to increased fitness costs, making intraspecific lethality relatively rare or atypical. Evolutionary selection has instead favoured mechanisms for rule-based ritualized restraint such as song duel display contests or mark-making practices related to territory. These mechanisms fall within an escalating fan of agonistic behaviours ranging from avoidance to various forms of non-contact displays and restrained ritualized forms of aggression. This dissertation considers the role of restraint mechanisms for the prevention of potentially lethal aggression as an evolutionary driver for the development and complexification of hominin communicative abilities, including articulated language and symbolic cultural practices.
‘Talking,’ ‘singing,’ ‘marking,’ or ‘reading’ oneself –and whole groups– out of potentially lethal aggression offer greater chances of survival than a pattern of unrestrained ‘all-out’ physical fighting. Studies I and II start out by presenting ethnographical evidence from Galizan case studies of song duels and mark-making practices, which are then presented in terms of cross-cultural and cross-species comparison. Study III focuses on analogous practices found within the urban Hip-Hop street culture. All three studies present a pattern of formal and functional continuity of restraint mechanisms across cultures but also across species, indicating a common phylogenetic origin. Gender, age and cultural differences found in the three studies also point towards a higher relevance of restraint mechanisms in segments of a population that are more likely to engage in potentially lethal aggression (particularly young adult males) and in societies where the risk of lethal aggression is present.
The findings of this dissertation suggest that restrained aggression can serve in certain contexts as a powerful tool for inhibiting escalated and potentially lethal aggression, with important implications for the design of violence prevention strategies. A revision of policies that imply the disruption of restraint mechanisms is invited.