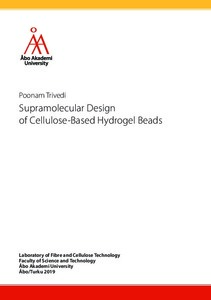 The degree of polymerization (DP) of cellulose fibres is an important factor to consider during dissolution in water-based solvent system and to design further advanced biomaterials. The lower is the DP, the higher cellulose concentration solutions can be prepared. Therefore, the DP of the cellulose fibres needs to be controlled. This was achieved by chemical pretreatment of the pulp in which the pKa of the chosen acid and the solvent used had a direct impact on the DP of the treated pulp. Stronger acids resulted in lower DP values of pulp in comparison to weaker acids. Higher ethanol concentration in the treatment solvent mixture lead to the enhanced recovery of the final pretreated pulp.
The pretreated pulp was used to design pristine cellulose beads in 7 % NaOH-12 % Urea-81 % water based solvent system. The cellulose beads were further functionalized into zwitterionic cellulose beads by performing (2,2,6,6-tetramethylpiperidin-1-yl)oxidanyl (TEMPO) mediated oxidation reaction followed by hydrazide coupling. The sodium chlorite (NaClO2)/sodium hypochlorite (NaClO)/TEMPO oxidation system resulted in the generation of carboxylic and carbonyl moieties in the beads. A coupling reaction between the carbonyl and carboxymethyl trimethylammonium chloride hydrazide (Girard’s reagent T) resulted in the introduction of cationic moieties in the beads. The molar ratio of the reagents had a crucial role in tailoring carboxylic and carbonyl content generation in the beads. The ultrastructural study of beads showed that zwitterionic beads had larger pores than the pristine cellulose beads.
Anionic cellulose hydrogel beads were designed by blending sodium cellulose ethylsulfonate (CES) an anionic cellulose derivative, with the pretreated cellulose in the 7 % NaOH -12 % Urea - 81 % water based solvent system. The rheology of the blends was studied and the hydrogel beads were coagulated in 2 M sulfuric acid bath. The effect of increasing CES polymer concentration on the hydrogel beads shape, water holding capacity, stability and ultrastructural morphology was studied. The incorporation of CES up to 50 % concentration resulted in stable hydrogel beads with enhanced porosity and water holding capacity.
Functional chitosan-based cellulose hydrogel beads were designed by blending cellulose with chitosan in the sodium hydroxide-urea-water solvent system and consecutive coagulating in 2 M acetic, hydrochloric and sulfuric acid systems. The concentration of chitosan and type of coagulating acid played a decisive role in selecting the hydrogel beads for testing in tissue engineering applications. The hydrogel beads with 70 % chitosan- 30 % cellulose coagulated in acetic acid showed the highest cytocompatibility with breast adenocarcinoma (soft tissue) and osteoblast (hard tissue) cells. The chitosan based hydrogel beads have the potential to be tested further for applications in the field of tissue engineering.