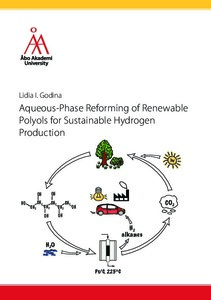 Godina, Lidia I.
Åbo Akademi University
This publication is copyrighted. You may download, display and print it for Your own personal use. Commercial use is prohibited.
Visa fullständig post
Publikationens permanenta adress är
http://urn.fi/URN:ISBN:978-952-12-3779-9

Renewable biomass can be utilized for sustainable hydrogen production via aqueousphase reforming (APR), which implies catalytic conversion of aqueous solutions of alcohols and polyols over transition metals at comparably low temperatures with formation of hydrogen, CO2, light alkanes, and a number of products in the liquid phase.
The current work is devoted to studies of APR of several alcohols and polyols and their technical mixtures over mono- and bimetallic catalysts [I-IV, VII]. A realistic APR reaction network [I, VII] and a kinetic model [V] were proposed, reactor modelling and process design were performed in [V, VI], and techno-economical analysis of APR was provided in [VI].
Propanol-1, propane-1,2-diol, glycerol, xylitol and sorbitol were studied in APR over different Pt/C catalysts. Influence of feed chirality was investigated for the first time in APR of sorbitol and galactitol over Pt/Al2O3 catalyst. Conversion of the technical mixture of sorbitol and mannitol was compared to commercial sorbitol in APR over Pt/C. Mono- and bimetallic carbon-supported catalysts were compared in terms of activity and selectivity in xylitol APR.
The reliability of the liquid-phase product analysis was considerably improved. Plausible reaction pathways were proposed according to the product distribution and discussed from a thermodynamic point of view. Different reaction paths of 1,2-propanediol APR were computationally screened on a Pt(111) model surface specifically addressing the competition between C−H, O−H, and C−C bond cleavages.
Experimental data obtained in the xylitol APR was utilized for reaction kinetics modeling, dynamic reactor simulation, and process design development. The process can be considered as a self-sufficient one, since the reactor heat demand is fully covered by the combustion of alkanes produced in APR.
Simulation of in-situ phase equilibrium was based on the results of the sorbitol APR. Process design of a hydrogen production plant with 500 kg/h capacity operating with sorbitol syrup was developed and optimized. A detailed techno-economical analysis was performed for the first time for estimation of hydrogen production price.