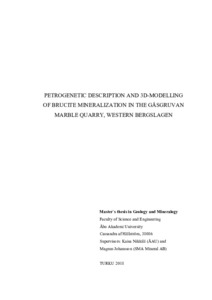 The Gåsgruvan quarry is located as a marble lens in the magmatic Bergslagen region in central Sweden. The deposit is hosted by 1.9-1.88 Ga Svecokarelian felsic metavolcanics and is exposed to igneous intrusions of different generations. SMA Mineral AB is currently mining coarse-grained calcite marble in Gåsgruvan for industrial use. Gåsgruvan has been subjected to mineralization of the hydroxide mineral brucite, which interferes with the floatation liquids during marble refining. Isochemical contact metamorphism between dolomitic marble and igneous intrusions, and retrograde serpentinization of Mg-rich forsterite have formed brucite.

All accessible drill cores have been relogged with the aim to determine and correlate brucite-rich zones within the Gåsgruvan deposit and to interpret the local petrogenetic origin. A 3D-model has been composed in order to demonstrate the general distribution of brucite. Complementary field mapping has been carried out within the quarry and its surroundings. Cross section profiles provided by SMA Mineral AB are utilized to study the relation between brucite and associated mineralizations. Petrographic and SEM-EDS analysis have been conducted with the aim to identify mineral assemblages and to study micro-scale relations.

Results show that brucite is concentrated in a crescent structure in the southern and southeastern deposit. Here brucite is formed by hydration of complex igneous and skarn intercalations. Brucite follows a curving pattern from southeast towards northwest and occurs in the contact of large, pre-peak metamorphic amphibolite at the western and southeastern margin. Smaller zones of brucite appear very scattered throughout the deposit, especially in the northern and central parts, where dolomite has assumedly been more abundant. In addition, some north-south striking shear zones have carried external fluids into the system and hydrated the deposit. The thesis is written in cooperation with SMA Mineral AB and Gåsgruvan Kalcit AB.