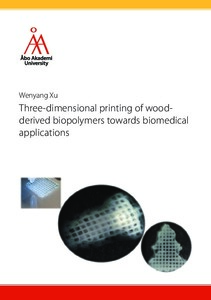 Three-dimensional (3D) printing has shown promising potential in fabrication of complex tissue with a structural control from micro- to macro-scale, meeting the requirements of tissue engineering. Wood-derived biopolymers as a category of biomaterials have attracted great attention as the feedstock materials in 3D printing owing to their abundant availability, biocompatibility, and in vitro biodegradability. However, the key issues are to tailor wood-derived biopolymers to 3D printable ink formulations and maintaining shape fidelity. The work of this thesis is dedicated to developing different types of ink formulations to be used in biomedical applications concerning the utilization of wood-derived biopolymers in a highly valuable and efficient way.
Firstly, the O-acetyl-galactoglucomannan (GGM), a side-stream biopolymer from Norway spruce, was investigated for filament preparation with poly-lactic acid (PLA) in its native and bulk form. A solvent blending approach was established to blend GGM and PLA together for further PLA/GGM filament preparation. As much as 20% of the PLA could be replaced by GGM without decreasing the mechanical properties of the filament. 3D scaffolds were successfully printed from the polymer blends by fused deposition modeling 3D printing. The biocompatible and biodegradable feature of wood-derived hemicelluloses would potentially boost this new composite ink in various biomedical applications such as tissue engineering and controlled drug release.
Cellulose nanofibrils (CNFs), a product of nanomaterials from cellulose, have been studied in formulating hydrogel inks owing to their intrinsic properties of the shear thinning behavior, structural similarity to extracellular matrix, and biocompatibility. The formulation of TEMPO-oxidized CNFs with gelatin methacrylate (GelMA) into low-concentration bioinks facilitated the crosslinking ability of GelMA (≤ 1 w/v %), and further enhanced the shape fidelity of the printed scaffolds. 3D printable low-concentration inks showed promising potential in tissue engineering due to the relative loose polymer network that can encourage cell-cell interaction, migration, and more efficient metabolism.
GGM as a polysaccharide with abundant hydroxyl groups was chemically modified to be used as the cross-linker for CNF-based inks. Two derivatization approaches were established. In one approach, TEMPO-mediated oxidation was applied to introduce carboxylic groups, which were further reacted with tyramine to obtain tyramine-conjugated GGM. In the other approach, GGM methacrylate was synthesized in a facile and green process under aqueous condition. Both tyramine-conjugated GGM (GGMTA) and GGM methacrylate (GGMMA) were separately studied to successfully form gel by enzymatic and UV-aided cross-linking, respectively.
Furthermore, surface-engineered biomimetic inks were formulated with GGMMA and CNFs thanks to the intrinsic affinity of GGM to cellulose fiber surfaces mimicking the plant cell wall. The formulated homogeneous inks facilitated the high-resolution printing of complex scaffolds and geometries. More importantly, the stiffness of the resulted hydrogels was tunable in a wide spectrum ranging from 2.5 to 22.5 kPa by controlling the degree of substitution of methacrylate and compositional ratio of CNFs and GGMMA. As a new family of 3D printing feedstock materials, the CNF/GGMMA inks will broaden the map of bioinks, which potentially meet the requirements for a variety of in vitro cell-matrix and cell-cell interaction studies in the context of tissue engineering, e.g. cancer cell research, and high-throughput drug screening.
Lastly, the biocompatibility of the CNF-based bioinks was proven with incubating 3T3 fibroblast cells. The mechanical properties and topography of the printed scaffolds with CNF/GelMA inks could manipulate the cell attachment and promote cell proliferation. The developed low-concentration ink formulations with a facile yet effective approach to fabricate scaffolds show a great deal of potential in bioprinting for wound healing and soft tissue regeneration.