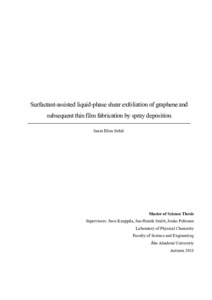 Graphite is the bulk form and source material of graphene, the versatile nanomaterial which consists of a single atomically thin sheet of carbon molecules in a honeycomb structure. It has unique properties, such as high elasticity, excellent optical properties and high electron mobility. The outstanding properties of graphene has made it the object of extensive research and a potential component for novel applications in several scientific fields, such as sensing technology. The scientific interest is high not just for graphene, the monolayer sheet, but also for graphene-like materials which are a common by-product of graphene production or otherwise resemble graphene by properties or structure. Graphene can be produced in numerous ways. This thesis investigates surfactant-assisted liquid-phase shear exfoliation which derives from mechanical exfoliation.
In the thesis, graphene was exfoliated from graphite in an aqueous surfactant-graphite suspension with a rotor-stator homogeniser. The graphene dispersion was separated with centrifugation and the graphene concentration was determined with ultraviolet-visible (UV-Vis) spectroscopy. The graphene samples were examined with scanning electron microscopy (SEM) and energy dispersive X-ray spectroscopy (EDX). Thin graphene films were produced with spray deposition and the electrical conductivity of the films was determined by measuring the electrical resistivity of the films.
Both commercial graphite and graphite excavated from Finnish soil were used to study the exfoliation, four different graphite samples in total. The graphite samples differed in particle size and purity. The Finnish graphite was excavated in Haapamäki, Finland, and purified with froth flotation and chemical leaching. The quality and yield of both the commercial graphene samples and the Finnish graphene were compared. The purity level of graphite was shown not to affect the graphene yield significantly, as opposed to the graphite particle size, which showed an effect on the yield. The electrical conductivity of the graphene thin films was found to be on a good level, considering the method used to produce the thin conductive components.