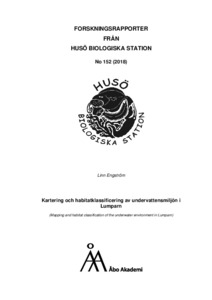 During the summer of 2018, the underwater environment in Lumparn was studied by mapping macrophytes and blue mussel colonies in the area. The goal was to establish an overview of the distribution of species and valuable habitats. The data was collected using drop-video at 205 locations and by mapping 12 transects by SCUBA diving. The collected data was analysed using a habitat classification model which was developed within the NANNUT-project. The model takes into consideration habitat forming macrophytes, such as bladderwrack, eelgrass, charophytes, vascular plants and red algae, but also blue mussels. Factors that further influence the results include bottom substrate, depth, exposure, total coverage of species and the occurrence of threatened or rare species. Eelgrass (Zostera marina) was more abundant and occurred in a larger number of locations than previously known. This species is considered near threatened and contributes to many valuable and vulnerable environments in the area. However, bladderwrack (Fucus vesiculosus) occurred at the fewest sites compared to the rest of the main habitats that NANNUT takes into consideration, and the bladderwrack individuals appeared to be in bad condition. Blue mussels were more abundant at the eastern side of Lumparn, where the environment is more influenced by the outer archipelago and hard bottoms are more common. Fast-growing annual filamentous algae were abundant, which poses a risk to other flora and fauna by covering and eventually suffocating them. These algae account for the main visible threat towards the different valuable environments found in Lumparn. The high occurrence of filamentous algae is likely a result of high nutrient contents in the water. Subsequently, there are many valuable habitats and species in Lumparn that require special attention, but they are threatened by annual fast-growing filamentous algae.