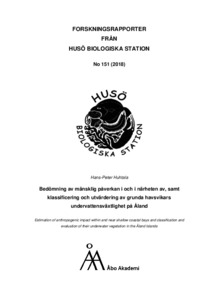 In the summer of 2018 the coverage data for underwater macrophytes was analysed to determine the degree of protection necessary with regards to 79 individual shallow bays on the Åland Islands. This was accomplished by using data gathered by previous research associated with the biological station, but also by mapping seven bays where studies on vegetation cover had yet to be performed. The bays were located all over the islands, and bays from 10 of the islands 16 municipalities were analysed with the NANNUT method, which uses data on vegetation cover to classify and assign ecological value to underwater habitats. The surrounding area of the bays was also analysed to estimate its anthropogenic impact. This was done by counting buildings, determining the area covered by roads, farmland and buildings, determining total meters of jetty, the proportion of modified coastline and the number of streams discharging into the bay. This was accomplished by using GIS data, and by analysing satellite imagery.
53 of the 79 bays were determined to need protection to safeguard their important ecological status. These were bays who were determined to be of NANNUT-ecological value of 3 or more. One further bay with a score less than 3 was also determined to be worthy of protection is also included in these 53 bays. The bays derived their ecological value due to the presence of stonewort meadows, dense and species rich vegetation, red-listed species and habitats especially important to juvenile fish.
With regards to the survey of the surrounding area of the bays; 76 of the 79 bays were found to have a high or good rating when estimating the anthropogenic impact on the bays, which suggests that the impact of the surrounding area is moderate for shallow bays on the Åland Islands. It should be noted that the impact is based on a mean value of several parameters, and that these individually often had poorer ratings, especially the parameter based on the amount of buildings in the surrounding area.