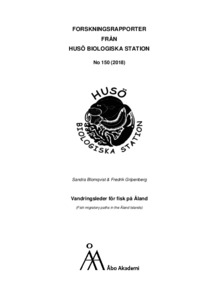 The project was launched in 2018 in the beginning of May and completed in the end of July. Part of the project was also performed in spring 2016. The aim was to map migratory paths of fish in the Åland islands. This was done by trekking the length of dikes and streams, which connect the sea to freshwater bodies, while noticing the condition of the migratory path and identifying possible obstacles along the way. The obstacles were classified as either potential or absolute. A migratory path obstacle can consist of e.g. culverts in a bad condition or wrongly positioned, dams and fish ladders that are ineffectively built or placed or natural obstacles in form of fallen trees, rocks and bedrock that blocks the stream. The dimensions of the obstacles were also measured. Where possible underwater video recordings were made to identify present fish species. All ditches were classified according to migration path potential: Suitable, possibly suitable, requires measures and not suitable. To be able to evaluate and restore migratory paths it is necessary to thoroughly map ditches and streams suitable for fish migrating to spawning grounds. The goal is to map all of the migratory paths on Åland and point out where to take action to improve these.
During this project a total of 96 dikes and streams were mapped. Of these, 43 were considered suitable migratory paths. Of the remaining 53 streams, 34 were potentially suitable, 11 were not suitable in their current condition and 8 were not considered suitable at all for migrating fish. However, 60 obstacles were encountered and 30 of them were considered as absolute obstacles. The absolute obstacles should be removed or altered if the ditch or stream where they are located is to be considered a suitable migratory path. The mapping of the status of possible migratory paths of spawning fish is of great importance. The reproduction of predatory fish in the Baltic Sea has declined during the last decade, most likely because of the decrease in coastal spawning grounds such as sheltered lagoons and bays due to over-exploitation of coastal areas.