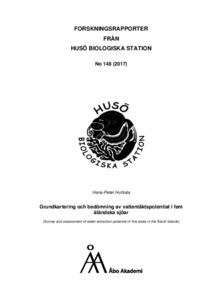 In the summer of 2017 five lakes (Storträsk, Toböle träsk, Borgsjön, Inre fjärden, Södra Långsjön) in the Åland Islands were surveyed to determine their potential for water extraction. The lakes were surveyed by mapping vegetation and by examining the benthic fauna and fish stocks. Of the studied lakes, two (Toböle träsk, Borgsjön) are used for water extraction to supply drinking water, and one (Storträsk) is used to water nearby farmland. Water extraction can affect water levels in lakes, especially under drought conditions with low levels of precipitation and runoff. Loss of water volume can lead to loss of species richness and to higher concentrations of nutrients and of fish-stocks in the lake. In determining the potential for water extraction, a rudimentary “water budget” was calculated based on data on annual catchment runoff and precipitation. The buffer potential of the catchment area was also evaluated using data to assess its composition, focusing mainly on the proportion of woodland and farmland found in the area, but also on areas assumed to have a low retention rate of water. The potential for water extraction varied in the lakes, and all had associating factors that made the lakes suboptimal. Based on the estimated water budgets the lakes currently used for drinking water extraction (Toböle träsk, Borgsjön) had water budgets suboptimal for water extraction. Toböle träsk was determined to have potential for a modest increase of extraction if precipitation levels were average, but should see no increase in extraction during dry periods, whereas Borgsjön should see no further increase during normal or dry years. Of the lakes that were found to be suitable for water extraction based on their water budgets, two (Storträsk, Södra Långsjön) were able to support notable volumes and one (Inre fjärden) a more modest rate of extraction. The ecological survey produced more nuanced results. All were found to have features potentially sensitive to effects of water extraction, but two of the lakes (Storträsk, Södra Långsjön) were determined to be especially vulnerable to water extraction. Storträsk was extremely shallow and had populations of Charophytes that could readily be exposed or replaced by other species if water levels drop, while Södra Långsjön was determined to be ecologically exceptional with its large population of Isoetids, which are vulnerable to water level fluctuations. The other lakes (Toböle träsk, Borgsjön, Inre fjärden) were found to have features potentially sensitive to the effects of water extraction, but to a more modest degree. The catchment areas of the studied lakes were all majority woodland, and only one had a significant proportion of farmland (Storträsk).