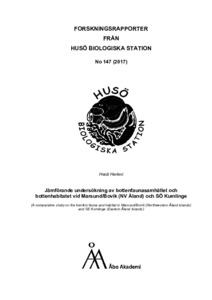 In the summer of 2017 a study was conducted comparing the benthic fauna composition and habitat between two areas in the Åland archipelago; one in the northwestern middle archipelago (Marsund/Bovik) and one in the eastern outer archipelago (Kumlinge). In total 20 stations (10 in each area) in the coastal zone were sampled for benthic fauna in four depth zones (0-3 m, 3-6 m, 6-10 m and >10 m). In addition, 44 and 45 stations (in Marsund/Bovik and Kumlinge, respectively) distributed among the same depth zones were studied for vegetation and habitat by using a drop-video method.
The species composition of benthic fauna showed no clear differences, but rather followed the same pattern regarding dominance of the Baltic clam (Macoma balthica) and deposit-feeding gastropods in the genus Hydrobia. The prevalence of other species, namely the non-indigenous polychaetes Marenzelleria spp. and some crustacean (e.g. Ostracods) also increased with depth in both areas. The Baltic clam also constituted the majority of the benthic biomass in both areas. However, even other bivalves made up a significant portion of the biomass in Kumlinge. The length distribution of M. balthica showed a dominance of small length classes (<10 mm) and a lack of larger length classes (>10 mm) in Marsund/Bovik, which indicates a low survival of older individuals, especially in the shallow areas. In Kumlinge, the length distribution was more even and shifted towards larger individuals, although small individuals were abundant. This indicates both good reproductive output and lower predation pressure on larger individuals compared to Marsund/Bovik. The largest differences were caused by the overall abundance and biomass of benthos, both of which were substantially higher in Kumlinge.
Moreover, the diversity of habitats was also higher in Kumlinge; both regarding average number of species per habitat and type of habitats. There were also clear differences in the vegetation assemblages in these two areas, as the most frequently observed species in Kumlinge was the phaeophyte Chorda filum, whereas angiosperms (Potamogeton spp., Stuckenia pectinata and Myriophyllum spp.) were most abundant in Marsund/Bovik. The charophyte Tolypella nidifica was also
observed frequently in Kumlinge. Bare bottoms were abundant in both areas, but constituted the majority of habitats only in Marsund/Bovik, whereas mixed-vegetation habitats were most abundant in Kumlinge. Soft bottom was the dominating sediment type in both areas. In both areas, approximately 20 % of the sites were classified as valuable habitat. However, habitats with high value for fish reproduction were more abundant in Kumlinge, mostly as a result of the higher vegetation cover in general.
Although the benthic communities in both areas seemed to be in good condition based on the prevalence of long-lived species (M. balthica), and a smaller proportion of opportunistic species, such as chironomids and oligochaetes, signs of eutrophication could be discerned. In Marsund/Bovik especially, oxygen depleted areas with hydrogen sulphide production were frequent. Some locations were also completely covered in mat-forming cyanobacteria. Moreover, filamentous ephemeral algae were abundant in both areas. Habitats dominated by the perennial brown algae Fucus vesiculosus, were scarce in both areas.