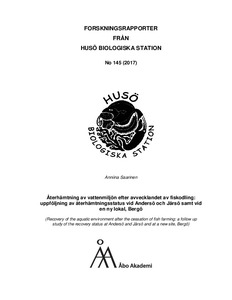 A follow up study of the recovery of the aquatic environment after cessation of fish farming at Andersö and Järsö was conducted summer 2016. Results were compared with a previous study in the areas from summer 2003. In addition, a recently terminated fish farm at Bergö was studied for future monitoring purposes. Water temperatures 2016 were in general lower and the amount of organic matter higher than 2003. Recovery of the aquatic environment was best explained with the benthos data. Benthos at both Andersö and Järsö showed signs of recovery after cessation of fish farming. At Andersö, the stations further away from the former fish farm, outside the Snäckö bay, were showing a recovery in abundances, biomass and diversity, but in general all stations showed a change from Chironomidae dominated communities to Macoma balthica dominated communities, which can be an indication of recovery. At Järsö area, stations farther away from the former fish farm had higher total abundances and biomasses than 2003. The stations closest to the former fish farm were still degraded, consisting mainly of Chironomids, but the total abundances and biomasses had clearly increased also there, which can be a sign of a next step of succession after colonization of opportunistic species. It is likely that the
relatively good water circulation in both Andersö and Järsö area has had an effect on the recovery, but possibly also the fact that Marenzelleria spp. had become more abundant in the areas and therefore possibly improved the oxygen conditions in the sediment. Nevertheless, reference stations both at Andersö and Järsö showed a slight decline in diversity and species evenness which might be a sign of an overall worsening in the areas water quality as a result of eutrophication or a result of natural fluctuations in the environment. At Bergö, the stations closest to the
former fish farm were most degraded, with low abundance, biomass and diversity of benthos. The stations farther away (including the reference station) and one station close to the fish farm on the western side were in better condition, but the diversity was generally low.