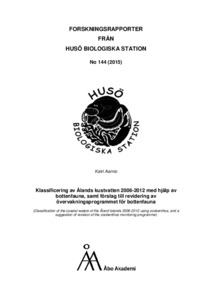 This report is divided in two separate parts. In the first part, the ecological status of the coastal waters of the Åland Islands was classified using zoobenthos (BBI; brackish water benthic index) as a parameter. In the second part, the zoobenthos monitoring programme on the Åland Islands was evaluated and suggestions for revision of the monitoring programme is given.
In 2006-2012, the ecological status based on zoobenthos was good or excellent in all 14 monitoring areas that Åland is divided into. When looking at deep bottoms only (> 10 m), the status was moderate in the Färjsundet area (inner archipelago) while the other areas had a good or excellent status. When assessing the ecoloigcal status of the waters around Åland Island using all biological (chlorofyll-a, macrophytes, zoobenhos) and physico-chemical
parameters (Secchi depth, total phosphorus, total nitrogen) the situation was worse: good condition was achieved only in two monitoring areas, while the other 12 areas were in moderate or poor condition.
The current zoobenthos monitoring programme has weaknesses in especially the spatial coverage of the sampling stations. In the current programme monitoring has been conducted mainly in the western part of Åland, while no sampling stations have been located in the eastern areas. It is suggested that new stations would be placed in these areas, and that the total number of stations is thus increased from the current 27 to 66. Sampling would be done every year on six stations while the rest of the stations would be sampled every three years, so that
every year a total of 26 stations would be sampled. Reference stations from the fishfarmers’ monitoring programme are suggested to be incorporated in the overall monitoring. The samples are suggested to be taken with an Ekman grab (alternatively a small van Veen or a Ponar sampler) and the samples to be sieved through both 1.0 mm and 0.5 mm sieves.