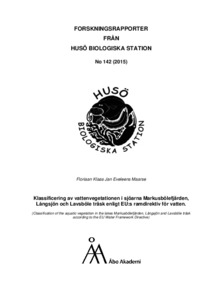 During the summer of 2015, three lakes on the Åland Islands; Markusbölefjärden, Långsjön and Lavsböle träsk, were surveyed for vegetation in order to be classified according to the EU Water Framework Directive (WFD, 2000/60/EG) together with hydrographical data. The EU-WFD aims to maintain and enhance the ecological status of aquatic environments within the EU and the status of the water resources should be at least good by 2015. This survey is a follow up of a previous survey performed in 2010 and also aims to improve the efficiency of the field methodology to be used in future surveys. It was found that the use of snorkeling as field method and the use of the Swedish method of transect selection, greatly increased the efficiency of the field work and quality of the data. Vascular plants, water mosses and stoneworts were included in the classification. The ecological status of the lakes was calculated with help of the three indices; TT50SO, PMA and RI. The final status was calculated as the median of the EQR received from each index. Markusbölefjärden, Långsjön and Lavsböle träsk achieved a moderate, bad and god status respectively in 2010. During the survey of 2015 the lakes achieved a status of unsatisfactory, moderate and high, respectively.