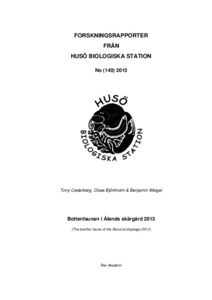 In the summer of 2013 a study of the benthic fauna in the Åland archipelago was conducted. The aim was to obtain an overview of the benthic fauna in the region and to describe changes over time (2006 vs. 2013). In total, 39 stations were sampled for zoobenthos and hydrography. Twenty-seven of the stations in this study were also sampled in 2006, while the remaining 12 stations have been sampled in studies prior to 2006. The 39 stations were located around the main island of Åland and the depth of the stations ranged between 5 and 37 meters.
Since the previous baseline-study in 2006 there has been a decrease in abundance and an increase in the average weight of the individuals at sheltered stations. At exposed stations an increase in biomass, number of species and average weight of the individuals was found. Macoma balthica increased in abundance at exposed stations. No marked changes in the overall length distribution of M. balthica were found between 2006 and 2013. However, at some stations, especially those in connection with Lumparn, there were some indications pointing towards reproductive disturbance among M. balthica.
In 2013 the ecological status was good or high at the majority of the stations. Only three stations located north of Lumparn embayment had a moderate or worse ecological status. Other findings in this study largely support the results of the ecological status classification. The situation at some of the stations in the Lumparn area is a cause of concern. However, at the station Ål Bergö somewhat contradicting findings were found. While the ecological status in 2013 was good, the oxygen level in the bottom water was below the limit of hypoxia (2mg/l). Special attention should be given to the Lumparn area as well as the area around Ål Bergö in future studies.
A revision of the exposure classification can give better representation of large scale changes in the benthic fauna communities of Åland. Therefore, a proposition on exposure class classification to be used in future baseline studies is also given in this report.