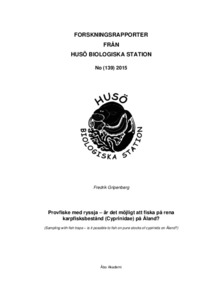 During the summer of 2014 a sampling with fish traps was conducted in Finström on the Åland Islands to determine whether it is possible to fish on pure stocks of cyprinids. The fishing was conducted during six weeks in August and September. The fish traps were laid on Monday and lifted on Friday. The piscivores (perch (Perca fluviatilis) and northern pike (Esox lucius) and bream (Abramis brama) <42 cm were measured in the field and released. The rest of the catch was measured (individually) and weighed
(per species) in the lab (including bream >42 cm). The general structure of the fish community was studied with one night of gillnet fishing per area where the fish traps had been located. Sampling with fish traps was also planned for Eckerö, but due to the local topography the fish traps were deemed unsuitable. A set of three gillnets were used instead. The most abundant species in the fish traps was
perch. When measured by biomass cyprinids made up 40.3 % of the catch, the rest of the catch consisting of northern pike (47.9 %) and perch (11.8 %).The total weight of the catch from the fish traps was roughly 100 kg. Previous studies have been performed in different part of Finland, e.g. the Pikkala bay and the Rymättylä area in the Archipelago Sea with mixed results. The study from Pikkala bay suggested that reduction fishery had no effect (the reduction had been to small). The study from Rymättylä was mainly aimed at identifying uses for cyprinids as a way to reduce the environmental impact of fish farms. The results from the 2014 sampling were disappointing, but there is potential in the fishing method. Fewer locations, a bigger fish trap and sampling in spring would be the most important changes to make.