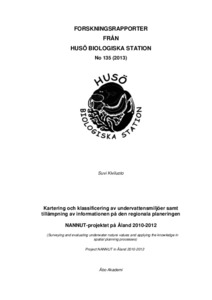 The Government of Åland, together with 9 other partners took part in the project NANNUT, funded
by European Union Central Baltic Interreg IV. The main aim in the project was to develop tools for
easier use of underwater information in the communal planning process and create a network for
cooperation in the northern Baltic Sea, from Kotka to Stockholm. In Åland the goal was to gather all
the information on the underwater vegetation from previous studies to a map database and during
field work seasons 2010 and 2011 fill in the gaps in research. During summer 2010 the focus of the
inventories was in shallow bays, mainly in eastern and northern parts of Åland. During 2011 fieldwork
was carried out as drop-video-inventories around the sea areas of Kumlinge and Eckerö. Both
methods were chosen to produce data that would be comparable to previously collected data in
Finland and Sweden.
The inventories focused on the sea bottom substrates, vegetation and blue mussel colonies. The
collected data were analyzed by a habitat classification model developed in the project. Furthermore,
the effect of human influence on the condition of shallow bays was estimated. Within the 22 bays
studied during 2010, eight were graded as good or excellent. Most of these bays were located in the
Föglö area. Effects of human influence were estimated in 32 bays of which 14 were considered as
unaffected or only slightly affected. All bays with high ecological value were either pristine or had only
minor effects by human activities. The bays with lowest values in both classification systems were
surrounded by fields and grazing areas and hosted small marinas. These closed bays were located in
eastern coast of Lumparland, near the Långnäs harbor.
In the analysis of the video inventories good or high habitat value was graded to 13.7 % of the studied
489 video points. Most of the high value points were located in the sea area around Eckerö. In depths
less than 8 meters bladderwrack communities were the most common as at deeper locations blue
mussel colonies took over. Dense vascular plant communities were common in both the Eckerö and
Kumlinge study areas. Healthy red algae belts were found only around Eckerö, where bladderwrack
communities were also much more common than in the Kumlinge area.
Both study methods were suitable for locating sea grass and stonewort meadows. Sea grass was
found in 3 locations during both field work season, stonewort meadows only during shallow bay
inventories. Considering these valuable habitats and other rare and protected species, a list with
locations has been delivered to both conservation authorities in Åland and to the HELCOM database
of red listed species.
All the data gathered within this project are available for public in the NANNUT internet portal.
Furthermore, detailed maps and raw data from the Åland study areas can be required via the
environmental office at the Government of Åland.