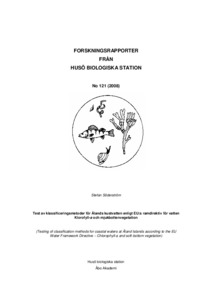 In association to the EU Water Framework Directive (WFD) all coastal areas in member countries must be characterized and classified. This concerns also the Åland Islands. The WFD gives a possibility to describe the Biological Quality Elements with some biological parameters. Two biological parameters (chlorophyll-a and soft-bottom macrophytes) were tested to meet the acquirements of the WDF for classification. The different water quality monitoring programs and a study of the soft-bottom vegetation 2007 in the archipelago of Åland Islands were tested for establishing classification according to class boundaries and reference values made in Finland and Sweden. 27 localities in previously less studied areas were visited, and distribution of soft bottom vegetation was studied for classification of the inner and middle archipelago areas, were this type of sediment is widely distributed. The method tested involved characterization of macrophytes into “ecological stadium groups”. Classification based on depth distribution was considered not suitable in the shallow waters of the middle and inner archipelago. The biological parameters tested in this study are suitable for describing the ecological status of coastal waters. However, classification based on soft-bottom macrophytes should be modified to better suite conditions in the archipelago of Åland Islands and there are still areas that are not involved in any monitoring.