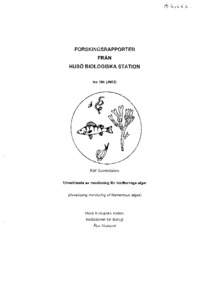 Occurrence of filamentous algae in shallow soft-bottom bays around Aland is/ands was studied from July to September 2002. The ground-truth studies, carried out in nine /ocalities, included surveys of macrophyte coverage, species diversity and biomass estimations. An experimental measurement of drifting algae biomass was carried out with small nets in three localities with different exposures. Aerial photography was performed in 26 /ocalities, including the localities that were sampled in field. The s/ides were studied for macrophyte coverage and occurrence of filamentous drift algae.
Filamentous algae were present in all of the ground-truth studied localities. Filamentous algae showed dominance in biomass in seven localities out of nine. In two of the /ocalities there was a mass occurrence of filamentous drift algae in the waterfront. The experiment showed that more biomass was in motion in the she/tered /ocality with rooted macrophytes than in a locality with a high exposure. The result was much due to the calm weather. In sheltered areas the drifting material is of local origin while in exposed ones it has drifted from other areas. The results from aerial photography were consistent with the results from ground-truth studies. Only few accumulations of drifting a/gae were observed in the waterfront or deeper water.
The methods that were used in this survey had all their good and weak points. A combination af the methods is recommended for the future monitoring af filamentous algae in shallow soft­bottom bays.