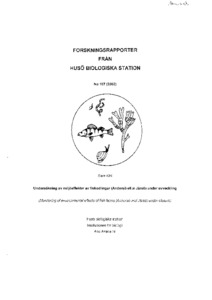 A study on zoobenthos, hydrography, sediment and periphyton growth was conducted at two fish farm sites under closure in the Åland archipe/ago June-September 2002. The aim of the study was to collect base fine data for long-term monitoring of environmental effects from two fish farms where production wi/1 end before the end of year 2002, fish farms being one af the largest single loca/ sources of nutrients in the Åland archipelago. The fish farms studied are located in areas influenced by different abiotic factors. One (Oiamond Fish in Andersö-area) is characterized by the conditions in the inner archipelago, with low salinity and /ow visibility, and rather warm water temperatures during summer. The farm is located in a narrow sound where a northerly-southerly stream dominates. The other area (Ålands Forell, Järsö) is located in a bay with a threshold, exposed from SW/W and with an inner basin where the bottom sediment is rich in organic content. There is an inf/ow of salt surtace water. The inherent differences explain much af the differences in hydrographical data. Effects af the fish farms are clearly visible in the zoobenthic community, as it is tota/ly /acking or very poor immediately close ta from the fish farms and down the prevailing stream. The organic content af the sediment is a/so higher c/ose ta the fish tarms, as we/1 as the carbon and nitrogen content af the sediment. During summer stagnation (July/August) in the very warm summer af 2002, anoxic ar hypoxic conditions were found in bottom waters in the inner basin at Järsö, and downstreams from the fish farm at Andersö, at stations with high organic content and with depths deeper than 10 m. Va/ues af phosphorus and nitrogen peaked during low oxygen events in bottom waters in the sediment basin of Järsö. Values af nutrients were genera/ly high according to existing c/assification systems.